After having completed his university education in mechanical engineering at Innsbruck, the future company founder Franco Toss at first worked for leading companies in development and design: From 1938 he was employed at the Junkers aircraft works in Dessau, involved in the design of the JU 90 aeroplane. From 1940, he worked in the development and design department at the Flettner aircraft factory in Berlin. After completing his military service in 1942, he designed petroleum plants for AEG.

Following the end of the Second World War, Franco Toss went into business for himself, at first repairing dental appliances. Starting in 1949, he began producing simple apparatus for clinics and also worked on the establishment of a clinic in Berlin.

The shortage of special machinery during the post-war period forced Franco Toss to pursue other commercial and technical paths. After becoming aware of the opportunities that film packaging offered, he began working out ways of joining (welding, sealing and gluing) plastic films. 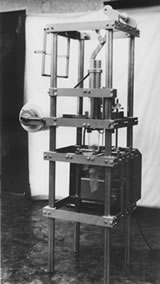 In 1952, Franco Toss designed a simple form/fill/seal machine for packaging soft soap for the German Railways. This was probably one of the first devices of the kind since the end of the war. That same year, he also registered the first patents and utility models. One of the most significant developments that year was the impulse band sealing method using a special-purpose steel that changes length greatly on being heated. This change of length is used for temperature control. The film-sealing units, at that time made by a separate company, were fitted with this control equipment. This mechanical method was the subject of further development with electronic elements over the next few years, and (using the same type of steel) is still considered the state-of-the-art today.

In 1957, Franco Toss left Berlin because of the blockade of the city. That year, he developed the first fully automated machine for the manufacture of polyethylene gloves. One year later, the first round-bottomed sealing system was launched, used in the manufacture of plastic inserts for steel drums.

In 1960, he began work as development manager at Hamac-Hansella, a company manufacturing packaging machines in Viersen, Germany. He developed for his employer the first moulded shoulders made from cast aluminium by the copy (contour) milling method, as well as the Tuff-Seal sealing system, which has been granted world wide patents. By means of this system, packaging with very high seam strengths could be manufactured on form/fill/seal machines for such difficult-to-fill materials as liquids, pastes, and warm contents. The system represents a technical standard to this day.

In 1965, Franco Toss left Hamac-Hansella, once again becoming an entrepreneur. In his own business - the present-day TOSS GmbH & Co. KG - he developed, among other things, a (patented) automatic packing machine (1967), and sold its license to Bosch, the successor to Hamac-Hansella. In 1968, the belt draw-off system was launched. This forms the basis for 90% of the form/fill/seal machines now in use worldwide.

The first hot air sealing system was developed at TOSS in 1970. It meant that polyethylene films, for example, could be sealed continuously, while much shorter form/fill/seal machines could be constructed.

The numerous recent innovations include, in particular, the pneumatics cylinder with ball tracks, patented world-wide, as well as the manufacture of shoulders using new, computer-aided manufacturing processes.